​The impact of coronavirus is being felt right across the world and we hope that you, your family and your friends remain safe and well. In accordance with government guidance British and Caribbean Veterans Association has cancelled all activities involving the gathering of individuals. We will update you of any change, pending government guidance. Stay safe and well. 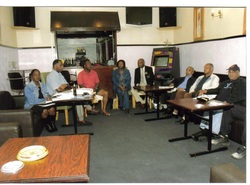 The meeting started with a minute silence for the passing of Mr Peter Kerr who died on 20th December 2017.

The Chairman informed the meeting of the sad news of the passing of Mr Peter Kerr. Peter was one of our long standing members that served in the RAF during the Second World War. His funeral took place at Beckminster Methodist Church on Wednesday 24th January 2018. Major Lindsay and the Chairman attended the funeral and both paid a tribute to the deceased on behalf of the association.

The Chairman wished  all members a Happy and Prosperous New Year.

Minutes of last AGM proposed by Mr R. Daniel and seconded by Mr H. Stuart.
Matters Arising:
None.
Reports (Verbal)
Chairman – Thank the officers for their efforts and commitment over the last year
Donations: Events:
Armed Forces Day Wolverhampton – This event was attended by Mr & Mrs McLaren, Ms P. May and several supporters.
Summer Ball – This event was well attended considering that there were a number of events taking place in Birmingham at the same time. Over 145 people attended, some travelling from as far afield as Plymouth.
Stan Bean 10 Years Memorial Service – On Sunday 25th June, a number of members attended the Memorial Service  for Stan Bean in Kings Heath, this was followed by a  buffet at the Tally Ho. and the Stan Bean Memorial cricket match took place at the same venue in the afternoon.
Remembrance Sunday: (1.) Birmingham - On Sunday 12th November 18 representatives attended the annual Remembrance Sunday service at CSMBC.
(2.) Wolverhampton – On 12th November 6 representatives of the association attended the Remembrance day service and took part in the City march pass on invitation of Lord Mayor. church Pat May laid a wreath on behalf of the association in Memory of all Caribbean Servicemen & Women who took part in WW1 & WW2.
Erma’s Annual Fund Raising Dinner & Dance – On the 23rd September, at least 15 representatives attended Erma' annual fund raising event at the Venue.
Nurses Association of Jamaica (NAJ) Annual Dinner & Dance – On the 2nd of December a number of members attended the Nurses Association of Jamaica Dinner and Dance..
BBCI – Invitation received for strictly over 70 years old to attend their 8th Senior’s Christmas Gala. Three members attended.
Christmas Social – The social took place but as the Chairman was not present and therefore was not in a position to comment. However, he stated that the next one will have to take place end of November or the first week in December.
PRO
The Public Relations Officer – Wished the members a Happy new year. He reiterated what the Chairman said and added that 150 people attended the Summer. The feedback received was good
Mr Stuart also reported that the Christmas Social was a success. 34 members and guests attended on a cold and icy evening. This was the first occasion that all aspects of the social was looked after by our members.
Treasurer

The treasurer informed the meeting that the latest Bank statement shows that there is £10,089.57 in the account and £55.50 Petty Cash.
Bank account signatures – At this moment in time we have only two authorised signatures. There is one outstanding signature which will be attended to.
Welfare Officer – no report.
Election

The Chairman - Mr Coke stood down and Mr Daniel took the chair for the purpose of re-election of the officers.
Mr Daniel enquired if Mr Coke or any other member would like to stand for election to Chairman position. There were no other volunteers. The vote took place and Mr Coke was elected by a majority to continue as the Chairman.
Mr Daniel vacates the chair. Mr Coke thanks the members and stated that he will continue doing his best for the association.
The Chairman asked all officers to vacate their position.
Treasurer – The Chairman informed the meeting that the next officer to be elected is the Treasurer, and enquire if any member present would like to stand for election to the Treasurer position. There were no other volunteers which left Mr Daniel as the sole candidate. An election took place for the Treasurer. Mr Daniel was duly elected as the treasurer.
Public Relation Officer – The Chairman enquired if any member present who would like to stand for election to this position. There were no volunteers. The Chairman enquires if Mr Stuart is willing to continue in this position, to which he replied yes. An election took place for the PRO position and Mr Stuart was duly elected to the PRO position.