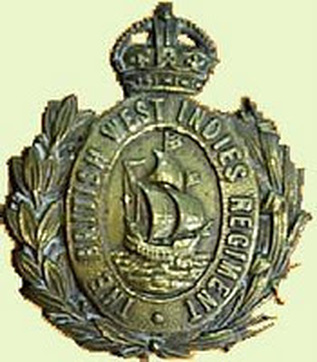 The British West Indies Regiment was a unit of the British Army during the First World War, formed from volunteers from British colonies in the West Indies.
The 1st Battalion was formed in September 1915 at Seaford, Sussex, England. It was made up of men from:A further ten battalions were formed afterwards. High wastage led to further drafts being required from Jamaica, British Honduras andBarbados before the regiment was able to begin training. In total 15,600 men served in the British West Indies Regiment. Jamaica contributed two-thirds of these volunteers, while others came fromTrinidad and Tobago, Barbados, the Bahamas, British Honduras (now Belize), Grenada, British Guiana (now Guyana), the Leeward Islands, Saint Lucia and St Vincent. Nearly 5,000 more subsequently volunteered

Eugent Clarke
​Jamaican who fought in Somme will meet the Queen
By Andrew Alderson and David Paulin
12:01AM GMT 17 Feb 2002
EUGENT CLARKE, a 108-year-old war veteran who fought at the Battle of the Somme more than 85 years ago, is to meet the Queen and Prince Philip in Jamaica tomorrow on the first leg of the monarch's Golden Jubilee Commonwealth tour.
Mr Clarke, a native Jamaican, had to endure fierce shelling on the Western Front and racism from his fellow soldiers after volunteering to risk his life for the British Empire in the First World War.
In an interview with The Telegraph at his home near the Jamaican capital of Kingston, Mr Clarke spoke of his excitement at meeting the Queen during the first official engagement of her tour when he will be joined by other war veterans.
Speaking haltingly and in a barely audible whisper, he said: "I feel very proud to see her because she is from England, and England is my mother country." His voice may have been shaky but his dark eyes twinkled behind thick glasses.
Mr Clarke recalled the Somme, when shells rained down, bodies of soldiers piled up and "the mud would drown you" in the trenches. He also remembered a brief respite from the conflict when George V visited the troops in France.
He said that he had been looking for adventure when he enlisted, but he was also motivated by his allegiance to the Crown. His wartime activities took him to Italy, Egypt, Canada and Britain.
Mr Clarke set sail for Europe as part of the British West Indies Regiment in March 1916. Roughly 10,000 Jamaicans served in the First World War. About 1,000 of them died.
His volunteer unit of the British West Indies Regiment was known as "coloured" at a time when the Services were segregated and black troops were assigned to "labour battalions".
"They were in the front lines and were exposed to shelling and active fire. But they also did things like digging trenches and laying telephone cables," said Major-General Robert Neish, now retired, who headed the Jamaica Defence Force and is now chairman of the Jamaican Legion of veterans affiliated to the British Commonwealth Ex-Services League.
Mr Clarke proudly wore his old blue uniform and three medals for his interview with The Telegraph: it is how he plans to appear before the Queen. He received France's Legion of Honour, a campaign medal and a war medal for his service.
The veteran played down the racial discrimination that black soldiers faced from fellow soldiers, including an incident famous in the Caribbean when his regiment staged a violent protest against discrimination in the closing days of the war in the winter of 1918.
He says he was not involved, though other troops he knew were disciplined. When asked of his wartime role, Mr Clarke simply said: "I have no regrets." Returning from the war, Mr Clarke found his mother had died and his father had remarried, while his teenage sweetheart had married another man.
There were few opportunities in Jamaica so he headed to Cuba, where he worked in the sugar cane fields for 10 years.
After returning to Jamaica he worked on farms planting sugar cane, yams and potatoes. During the Second World War he served as a security guard at an American airbase. Mr Clarke did get married, but his wife, Margaret, died 37 years ago. He has no children.
Mr Clarke, who enjoys history books, English literature and poetry, receives £15 a month from the British Commonwealth Ex-Services League which is being supported during the Golden Jubilee year by the Queen and the Duke of Edinburgh.
Today he lives 30 miles southwest of Kingston. It is close to where he grew up and he is respected by local people who affectionately call him "Pa".
Velet Miller-Lewis, a semi-retired nurse who helps care for Mr Clarke, described him as an optimist who is deeply religious. "He holds on to God. He does not worry about anything," she said.

Clifford Powell, Jamaica,  Served with the British West Indies Regiment. Emigrated to Cuba at the end of World War 1. 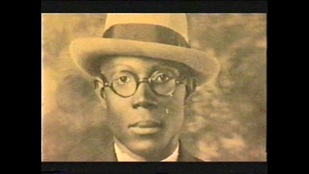 Born in St Michael, Barbados, Wickham served in Palestine in the British West Indies Regiment of World War I[1 and after his return to Barbados joined The Herald newspaper, edited by Clement A. Inniss, in 1919 and wrote for universal adult suffrage in a column under the title "Audax" (the listener). Wickham became sole editor of the newspaper following Inniss's early death.
In 1921, Wickham summarized attitudes of members of theBarbadian House of Assembly in the first years of the twentieth century as follows: "There is no sense of duty to the individual of the island as a whole. There is no sense of responsibility for broad and reasonable treatment. There is merely a sense of class." By the late 1920s, he developed a reputation for being one of the foremost critics of the plantocracy and brought into the open that, although patterned after British common law, Barbadian law in 1900 was in a sense an objective code of rules whose ethical validity transcended the interests and attitudes of several classes on the island.

Soldier of British West Indies Regiment in Egypt 1917.
Powered by