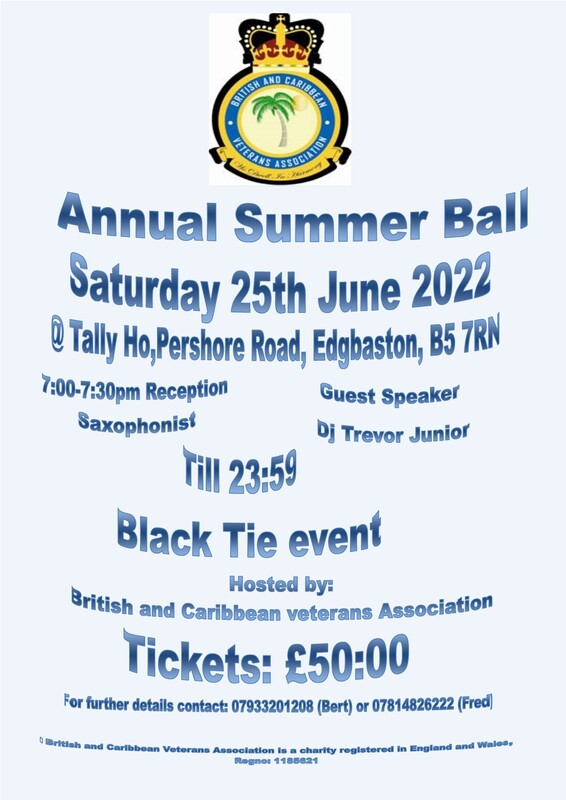 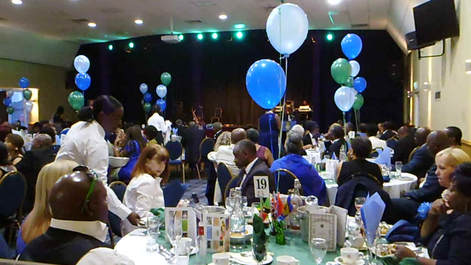 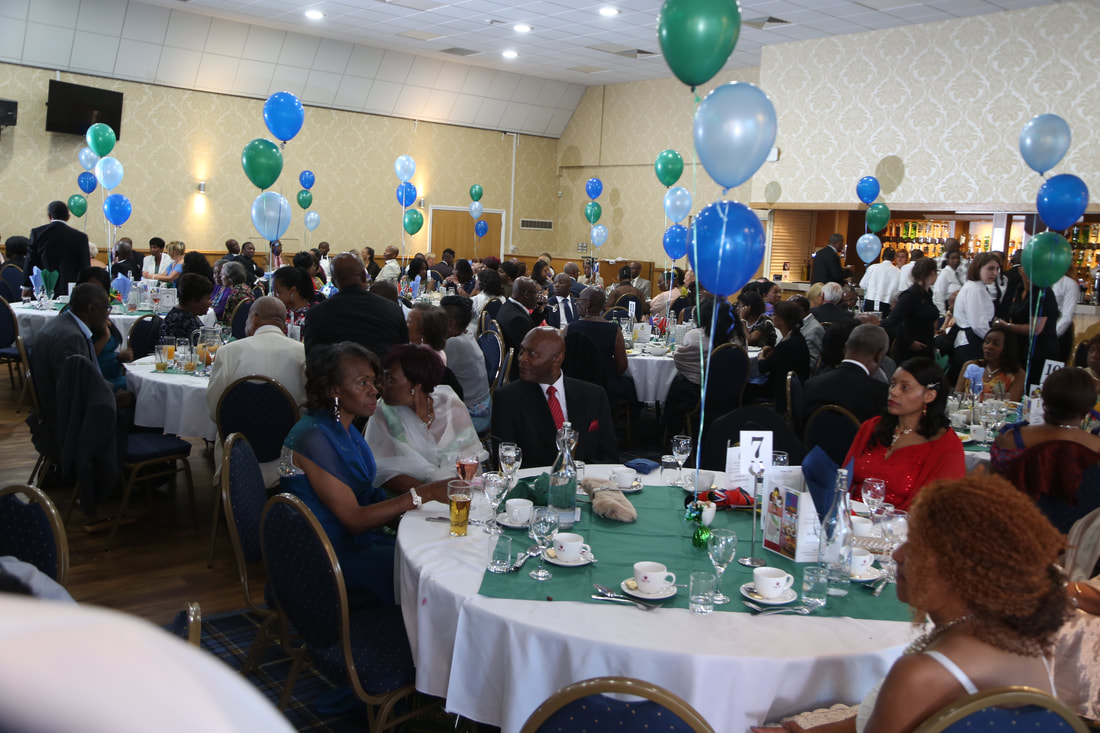 Social Events
On Saturday  30th June  British and Caribbean Veterans Association Annual Summer (Ball Dinner & Dance) was held at theTally Ho, Edgbastgon, Birmingham.. 177 people attended the event and without a doubt, it was our best ever.
We are truly blessed to be supported by so many dedicated people every year we hold this event. We simply cannot describe how pleasing it is to see all of your faces at the gala and be surrounded by people of all ages over 50 who came
out to enjoy the dancing, food and meet up with old friends and colleagues, some of who travelled places
as far apart as Plymouth and Peterborough.
This year marked 100 years since the formation of the Royal Air force and our guest speaker, Flight Lieutenant Howell has
serve for 45 of those year. Flt Lt Howell gave an enlightening and informative account of his time in uniform and being of
the Windrush generation gave guests an insight of his personal views of the situation.


The 2017 Christmas Social will be held at the Laurel Road Sports and Community Centre, Laurel Road, Handsworth, Birmingham B21 9PB, Commencing at 6:30 pm. 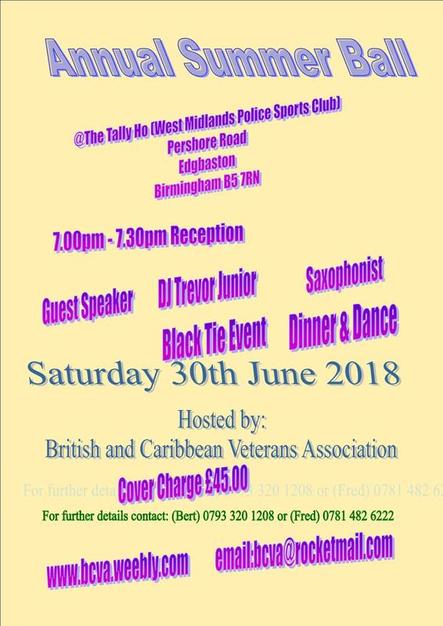 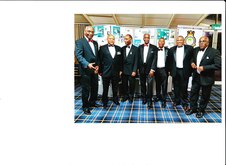 To pay for your tickets by Bank Transfer, please make your payments to, HSBC, Account number:81132784 sort code:40=11-12
On Sunday 16th July Friends of the Caribbean, a charity base in Milton Keynes will be entertaining Lashings All stars in a charity cricket match as part of their family Fun Day. Please coming along and support a worthy cause. 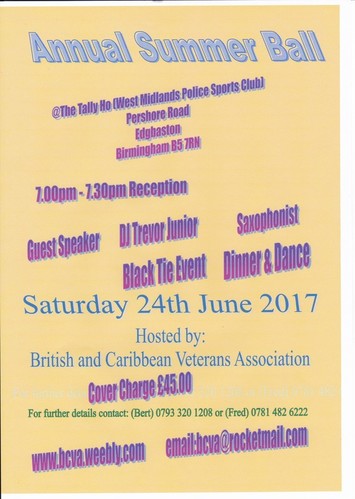 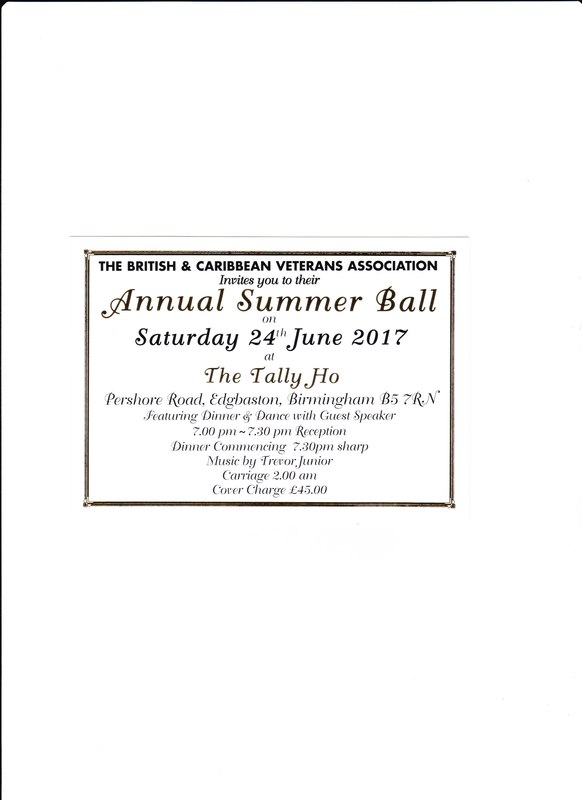 charge £5.00 - Bring a friend. Tea,coffee,snacks
All profits will go to the Curphey Home 'Jamaica' refurbishment fund. 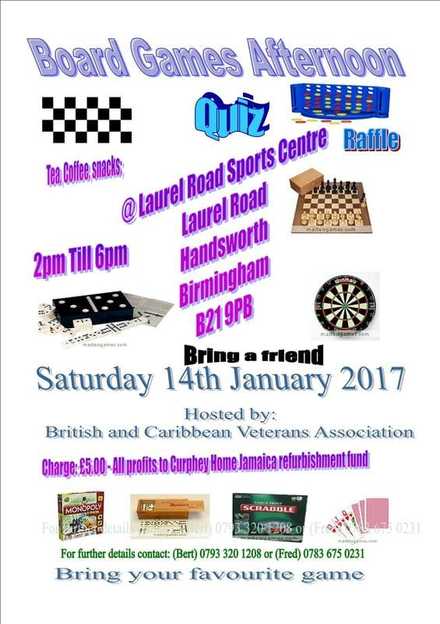 Remembrance Day service 2016
Remebrance service this year is sunday 13th November, at Canon Street memorial Baptist Church, Handsworth, Soho road, Birmingham, B21 9NA. Members are asked to be seated by 10:30am. Service commences at 10:45. Those hoping to attend should please let the secretary Marjorie Richards know.

Christmas Social 2016.
This years christmas social will be on Friday December 9th at Club De-oriole,54-57 Keyhill, Hockley, Birmingham. B18 5NX. 8pm till midnight.

This year's annual Summer Ball took place on saturday 25th June 2014 at the usual venue, The Tally Ho. Pershore road, Birmingham B5 7RN. 150 Members and guests attended and a good time was had by all. Highlight of the evening was an excellent speech by Squadron Leader Stephen Grant, RAF.

On Tuesday 25th February 2014, members went on a coach trip to the RAF Museum Hendon to see the 'Pilots of the caribbean exhibition', which celebrates the contribution of men and women from Africa and the caribbean to the development of modern Britain.

Entrance to the exhibition was free.

Tuesday, 8th July 2014
The association supported a local community senior citizens group
on a trip to the Slave Museum, Liverpool. 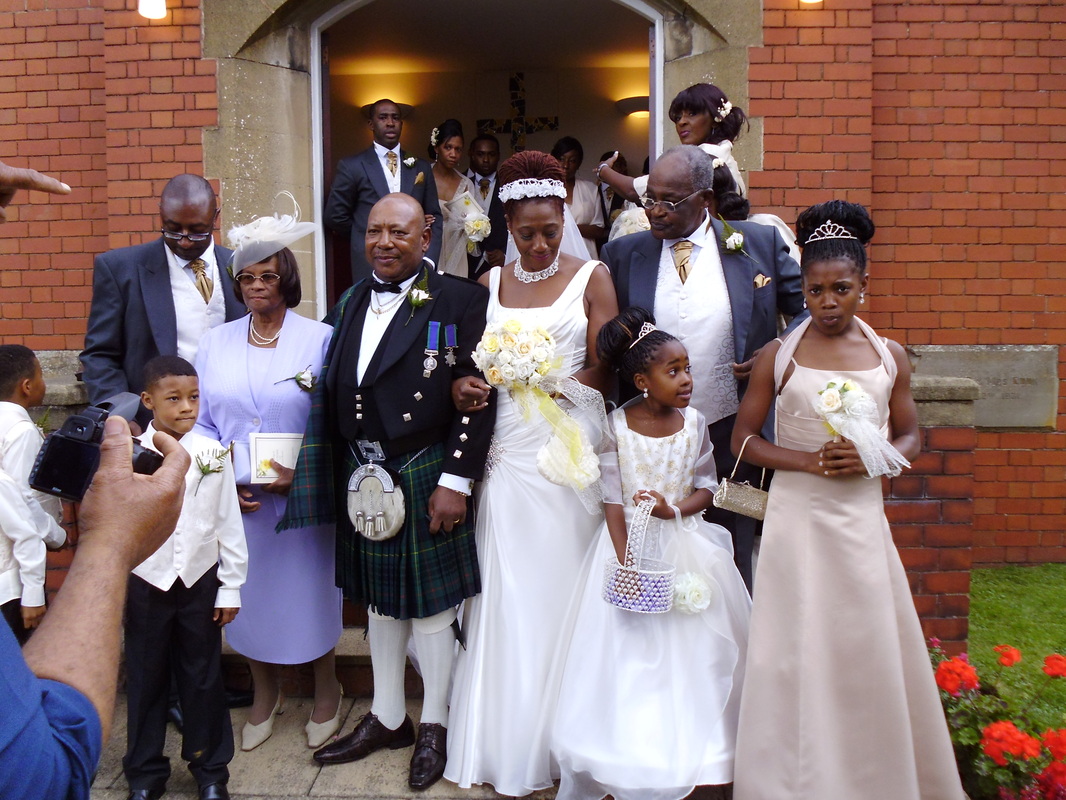 On Saturday 7th September 2013, 2.30pm, at the Tabernacle Baptist Church, Wolverhampton,  Trevor Mclaren and Karen Brown were joined together in holy matrimony. Our best wishes to the happy couple. 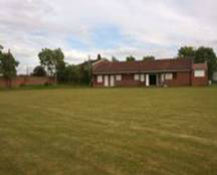 Cricket Match 4th June 2012
The friendly (charity) cricket match against Wilnecote Cricket Club,  Wilnecote, Tamworth was a success. The game was played in the true traditions of the game with both sides displaying signs of good sportsmanship and competitiveness.

The ex-servicemen 10 (we were 1 man short) with an average age of over 60 were defeated by a much younger team. Stil the younsters did not have it all their own way on the day as, the biggest 6 of the day was hit by one of our batsmen who is over 70 years old.

We had excellent support from the crowd, and the BBQ was good. Many thanks to Mr Ray Seagrave and wife for their enormous support and contribution, members of (BCVA) the association, wives, girlfriends, boyfriends and all at wilnecote cricket club who assisted in making the day a tremendous success. 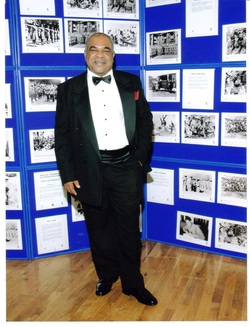 Owen (Nobby) Grant, a founder member of the Birmingham Asssociation is retiring to Jamaica in November.  we thank Nobby for his hard work and and dedication and wish him a happy retirment in the sunshine.

Another founder member departs for sunnier climes
Big Owen (Nobby) Grant, ex-Matloe, our current Treasurer and a founder member of the Birmingham association will be heading back to Jamaica at the beginning of November. I am sure that all members of the association would like to join me in thanking 'Nobby' for his hard work and unwavering commitment to the association over the years. On behalf of all members I would like to wish Nobby a long and happy retirement in the caribbean sunshine.

Mr kelly also flew off to Nevis for his annual 6-month holiday and should be back in may.

On the evening of  Sunday 17th October , members of the association gathered at the Bricklayers Arms, Icknield Port road, Birmingham, for a few farewell drinks with 'Nobby' Grant. we thanked Nobby for the work  he did as Treasurer and the B-B-Q's he organised. Nobby was presented with a 'Tankard'' as a token of our appreciation of his commitment. We wished Nobby a happy retirement and hope to see him back in 'Brum' on one of his summer visits.

Vincent Daniels (Ex-Warwickshire Regiment) takes over as the new Treasurer.

In early/mid December members and friends will meet as usual at the  F & C Social club for pre Chrstmas refreshments. 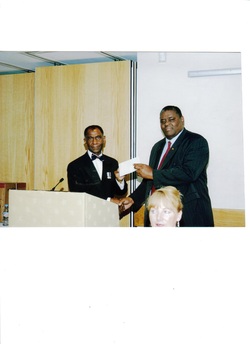 High Commissioner for St. Kitts and Nevis accepting cheque for £500, from Chairman Fred Coke on behalf of ex-servicemen and women in St.Kitts and Nevis. 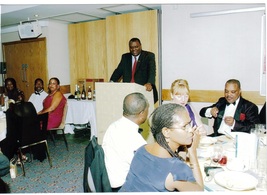 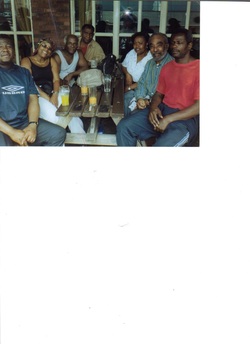 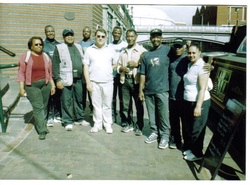 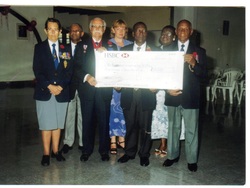 Daniel Knowles Daniel Knowles is an Assistant Comment Editor on the Telegraph website. He writes about politics and economics and is @dlknowles on Twitter.
Society isn't broken: we're just ignoring the bits that work

The desperate inner city this morning

I awoke this morning, slightly bleary eyed, to find an army outside my window. For a second, I thought a war must be on but then it transpired that most of the camouflage-clad young men and women standing in neat rows were about 15 – all cadets. Then there were some dignified old West Indian gentlemen in dress uniforms, and a detachment of perhaps twenty real soldiers led by a man with a stick (Territorial Army I later discovered). I found some trousers, wandered outside and asked a bemused police officer what was going on. "It's a commemoration" he said, "for West Indian servicemen". And under my window!

Pretty soon, an order went up and the assembled teenagers, grandfathers and soldiers began marching towards Brixton Town Hall, five abreast, blocking off traffic. On the pavements, children and adults stood and cheered. Then several dignitaries gave speeches, before a minutes silence. One man (annoyingly, I didn't find out his position) praised the West Indies veterans' organisation which organised the march: "we cannot rely on anything other than this spirit of endurance and our own endeavour". The Jamaican High Commissioner paid homage to West Indians "serving around the world, wherever the Union flag is flying" and to Jamaica's pride in its history and its part in the Commonwealth.

And I realised as I watched this spectacle take over Brixton, that these hundred or so teenagers are a much fairer representation of the area than their contemporaries who hang out in children's parks smoking dope. They're more normal than the few hundred who came through smashing windows and stealing televisions three months ago. Most of the Caribbean mothers standing around the edges were the sort you see arguing over the price of meat in the butchers' shops on Electric Avenue, watching proudly as their children spent their Sunday morning standing to attention to honour British soldiers. This is what Brixton usually looks like.

We in the media are not switched on enough to things like this. Places like Brixton mostly get attention from journalists when riots break out, or when someone is murdered, or as part of angst-filled social commentaries written from the worst estates. It's important to cover those things, of course, and if all anyone wrote about was how happy the world is, the newspaper industry would be far closer to death than it already is. But it is too easy to think of areas like Brixton purely as poverty-struck, crime-ridden, welfare-dependent sink holes. They're not.

When I hear politicians use phrases like the "broken society", as David Cameron still occasionally does, it makes me deeply uneasy. What amazes me is how well things are actually still working, especially when you consider the state of the economy. Sure, we've got problems, but I'm inclined to agree with the Army officer I spoke to this morning: I suggested that this is a pretty good show of why society isn't broken. He cheerily replied that all these politicians "are talking out of their f***ing a***s".
Powered by